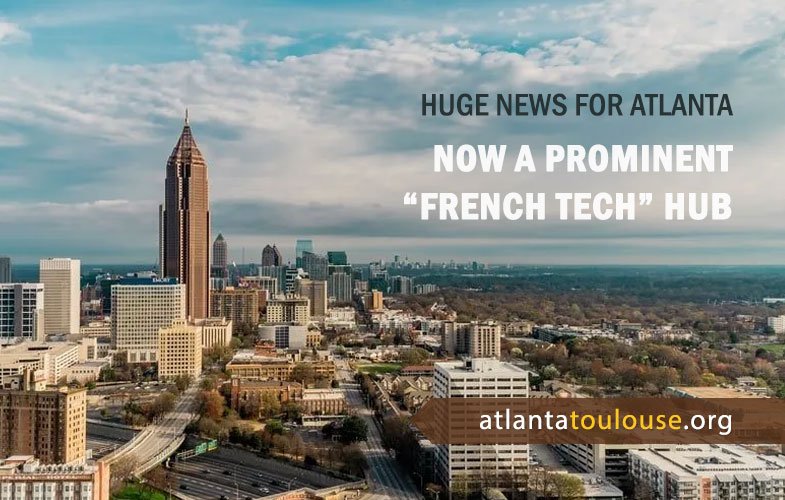 Ever since before the COVID-19 pandemic arrived in the United States, Atlanta has been making an effort to increase technology jobs and to provide a new home for innovation in the south. Competition with Florida has been fierce, but the rise of social distancing communication has been a major driving force in Atlanta’s rise to prominence as a tech hub. As Atlanta’s sister city, Toulouse also stands to gain much from this new nomination.

What Is a Tech Hub?
Simply put, a tech hub is a city or metro area that has a high concentration of or support for technology businesses and startups. This distinction is incredibly helpful to the economics of a city, especially in today’s highly digital marketplace. According to Mr. Lefon, “Atlanta is becoming a tech hub. In 2019 venture capital and private equity have invested $1.8 billion in start-ups here; last year four of them reached unicorn status.” Wikipedia states that unicorn status is a term that describes “a privately held startup company valued at over $1 billion.”

What’s the Significance of a “French Tech” Hub?
While being named a tech hub is helpful enough to a location’s economy, the specificity that the term “French Tech” hub brings is getting Atlanta residents excited about the future. As with marketing techniques that target locations and areas, the title “French Tech” hub will help to put Atlanta on the map for French investors. Mr. Woodward states that “having this imprimatur from the French government carries a lot of weight for French companies in particular.”

France – Atlanta
Over the past few years, the organization France – Atlanta has been building relationships and investing in the humanitarian affairs, business, science, and culture of Atlanta. Since 2010, the Consulate General of France in Atlanta and the Georgia Institute of Technology have been working together to strengthen the connection between the Southeastern US and France.

How Will This Impact Atlanta and Toulouse Small Businesses?

While there may not be a visible impact within the next year, we can all expect to see long-term changes and expansion. It is suggested that we will see brand new tech startups come into the area, and this might drive residential expansion, too. After all, more jobs would mean an influx of residents who need real estate. It’s difficult to predict exactly what kind of outcome we should expect, but it should be extremely positive!

Investment Opportunity
We’ve already seen incredible investments into French-American startups here in Atlanta like Mirakl. La French Tech is committed to helping startups in French Tech cities across the world. For more information about them, take a peek at their website.

What are your thoughts about the new announcement? How do you think this designation will impact the business economy of Atlanta and Toulouse as travel restrictions start to lift after the COVID-19 pandemic?